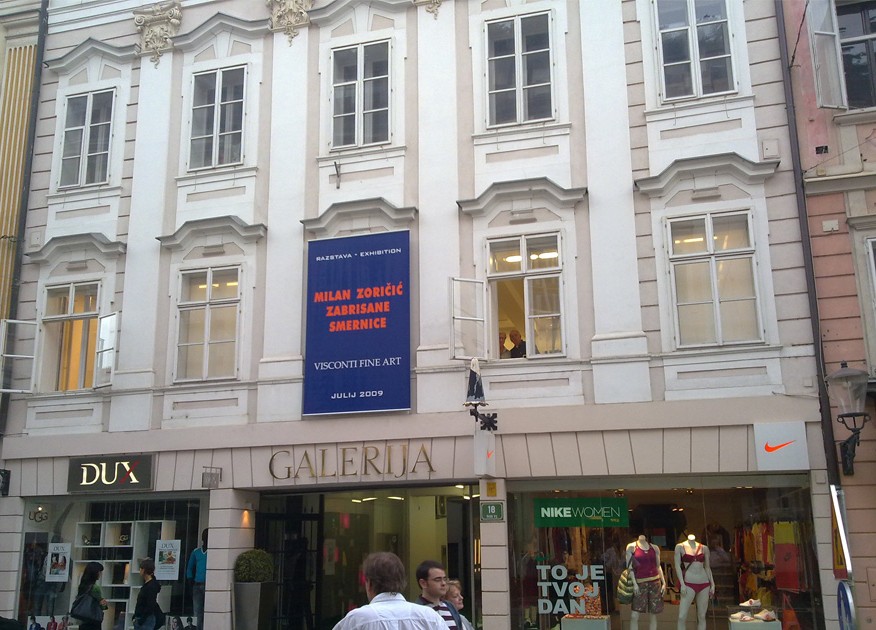 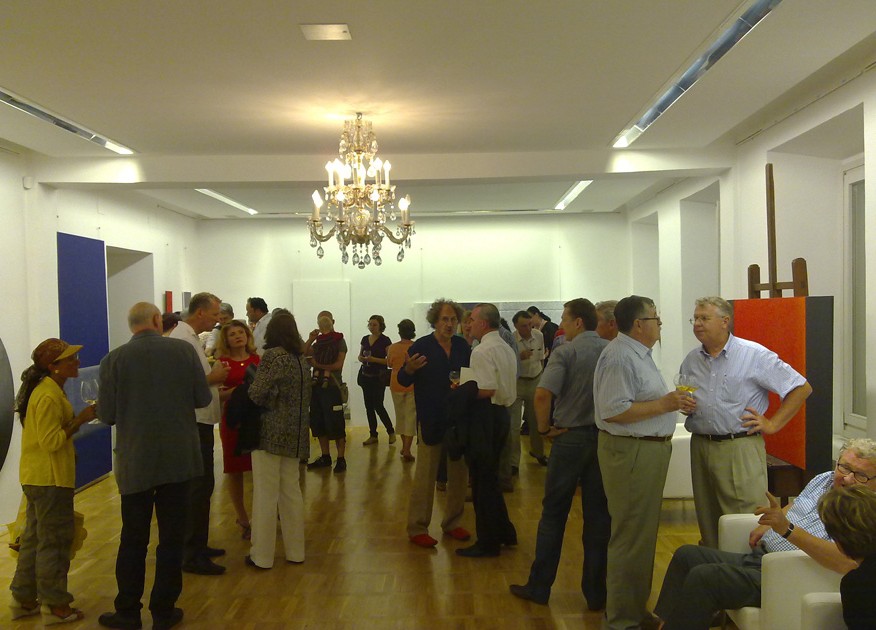 In spite of predictions to the contrary, the re-playing of the various registers of the modernist painting has to a great extent contributed to the fact that visual art, in its confrontation with the media, which by definition relate chiefly to technological innovativeness, securely kept its specific, to an extent indisputably privileged position. The topical nature of this is the result of not only the research efforts of artists themselves, but also the increasingly emancipated observer, who is no longer willing to be merely a passive receptor of the visual inventions with which he is faced, but who rather wants to consciously recognise himself in the constellations of the image-creating processes, no longer limited only to registering and communicating, but in their very foundations designed interactively, with an emphasis on discoursal self-reference and the material framework, which is what facilitates it in the first place. Interpretation strategies can thus no longer stem from the hypothesis of how to “explain to the blind what it is they cannot see”, as Jacques Ranciere insightfully concludes in his essay on the delusions of the philosophy of criticism; instead, its relevance should be based on the fact that the person observing knows what they are observing and what is their attitude to what they see.

In Milan Zoričić’s paintings two important aspects coincide: the artist’s indisputable knowledge of his metier – a mastery of traditional painting procedures that is nowadays often lacking – and a clearly outlined concept of how to build a painting in such a way that a convincing visual and conceptual effect is achieved without any speculative outlets. The fact that the artist tackles such demanding techniques as traditional fresco or encaustic in such a sovereign fashion only goes to confirm his belief that today formulations need to be built on experience from previous centuries, on the knowledge and skills that time was not able to touch, and if we can use them to articulate different content that is more appropriate for the present, the potential of their expressiveness and their energetic aura become timely to an unimaginable degree. Paint as the material on the one hand and the trompe l’oeil effect on the other are in Zoričić’s paintings marginal aspects that do not exclude each other, whilst attempts to thematise them within the same painting are the rule rather than the exception. How slippery can be the perception of a visual formulation that is aware of its illusionary nature whilst at the same time not denying its material origin is demonstrated by Milan Zoričić through the comparison of the various possibilities of the articulation of artistic modes of address: in some cases he artistically “models” the spatial illusion of the relief surface by using the most conventional method of plastic illusionism, whilst at other times he physically, using incisions and layering, achieves the composition of the carrier, thus de facto transforming it into a three-dimensional entity, where spatial placement using tricks involving paint and modelling is no longer necessary. The instrumentalisation of this process must thus happen at another level, by arranging paintings in the gallery space, in a specific given architectural state that the painter accepts as it is, but with the open possibility to freely create in this space pluralistic chromatic situations by positioning the selected visual units. When paintings are moved from the studio into a gallery, they function in a spatial order determined in advance by the empty interior with regard to their format and colour relationships. This is why arrangement is always important: in fact, it is a continuation and a temporary completion of the creative process, which with each completed work begins once again with the whiteness of the carrier.

One of Zoričić’s characteristics is a very material view of paint as an entity that is in relation to the carrier particularly intense, as the applied layers literally stand out from the surface, but at the same time they, in a dialogue with light, change into their own opposite, i.e. the intention of combining the tangible with the intangible. The tension generated by this dualism is a logical consequence of the presentation strategy, directed towards the paintings, either by themselves or in the context of the placement structure, not leaving the observer indifferent. Or to put it differently, in the role of a feeling subject we are drawn to the division of sensibility materialised by the paintings as sensory and conceptual statements, we are placed in the state of expecting an image that is supposed to appear from what we can see before us, i.e. the latent image with no reference in the material, the signifi er without the signified. If we consider the productional and interpretational changes that abstract art has experienced in its history spanning roughly a century, Zoričić’s position within this production can be described as being closest to the Deleuzian concept, referred to also by the critic and theoretician Ernst Van Alphen, who states that it is still possible to invent new, unique forms, independent of previous models and types. A painted surface, with all the details perceivable on it, again and again faces the observer with the dilemma of whether to see in it the still unresearched dimensions of remote worlds or to look at the enlargements through a microscope. In this sense, Zoričić’s paintings are a constant challenge to the imagination that is activated spontaneously at each meeting with the unknown, with a different correlate from the empirical. Just as the pioneers of abstract art justified their stance in the transition from reality as it appears to the spiritual (Kandinsky) or metaphysical (Malevič, Mondrian) through the distillation of form, their American successors placed at the forefront the fl atness of the carrier as the binding definition of the medium (Pollock, Newman), and Europeans emphasised the subjectivity of statements in categories, theoretically thematised in the chosen chromatic paradigms. Every artist finds his starting points in his own judgement and for Milan Zoričić we can say with certainty that he has found his. 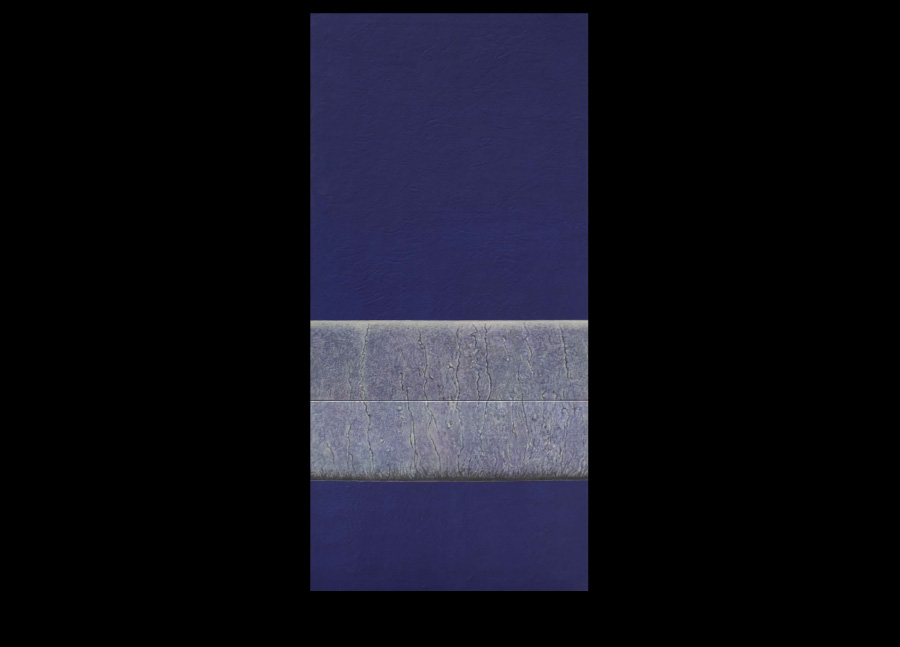 Besides the usually accentuated “double coding” of Milan Zoričić’s works spread between the artist’s primary discipline – architecture – and his self-chosen artistic discipline – painting in the fresco technique, his personal poetics is characterized by an esthetics close to “minimal art”. I don’t want to suggest that Zoričić’s works are formally related to or resemble the works of historically prominent Minimalists, but I want first and foremost to point to the affinity between their modes of reflecting and representing artistic problems. My preliminary arguments are based on H. H. Arnason’s authoritative History of Modern Art (New York, 1986), in particular on the introductory citations of the chapter entitled “Minimal Art and Primary Structures” (p. 520). According to this eminent theoretician of modern and postmodern art, artists with a certain affinity to minimal art, are “related closely to a number of significant tendencies of the decade” (the author refers to the 1960s), to “the sculpture that creates an architectural space or environment; the paintings involving the shaped canvas (here it is often difficult to draw the line)” and last but not least to “the paintings with mathematical systems as the basis of their organization.”

By way of comparison with Zoričić’s artistic approach, we find particularly significant Arnason’s claim that minimal art “also had relations to certain aspects of Color Field painting that, in turn, overlapped with Systemic painting.” The stylistic approach referred to is definitely identifiable in Zoričić’s artistic process – in particular, in the markedly impressive image of the exhibited work “Plavi diptih” (The Blue Diptych). What needs to be particularly emphasized is that the set of characteristics in his paintings proper of “minimal art” are irreducible to any personal style of the artist’s famous predecessors since Zoričić’s works stand out for their original artistic language.

Even the most cursory glimpse at the artist’s portfolio gives a convincing explanation as to why Zoričić draws upon historically proven formal approaches: following his decision to set out on the agonizing path of artistic catharsis, he gradually gave up representation in favor of synthetic materials and abstraction. In other words, the original variant of minimal art developed by Zoričić is not the artist’s point of departure. Rather, at least for the time being, it is a final stage of Zoričić’s artistic exploration, originating from the karst environment of Knin and giving an insight into the Croatian tradition of associative landscape painting on the verge of abstraction (Gliha, Šimunović). To end with, I shall refer to a lucid remark made by one of the great names of Croatian painting tradition, Marino Tartaglia, who stated nearly three decades ago that Zoričić’s paintings are “works that form a uniform body of color”.